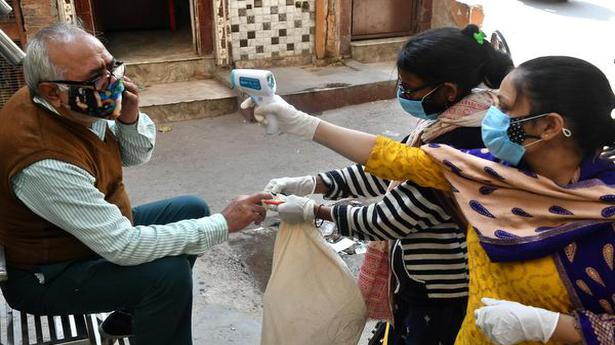 Uttar Pradesh’s eight districts that lie in the National Capital Region (NCR) account for over 25% or one-fourth of the State’s active COVID-19 cases and nearly 11% of the deaths linked to the disease, according to official data.

Uttar Pradesh, the most populous State in the country, has 75 districts, including major ones such as Lucknow, Kanpur, Allahabad, Varanasi, Agra, Gorakhpur and Bareilly in terms of population and area.

The NCR altogether comprises 23 districts from the three States of Haryana, Uttar Pradesh and Rajasthan, and the entire national capital territory of Delhi spanning across 55,083 sqkm, according to the NCR Planning Board.

The official Statewide data does not share any number on testing of samples nor does it show the total positive COVID-19 cases at the district level. There were 4,39,747 active cases of COVID-19 in the country, while 84,78,124 patients have been discharged and overall 1,32,726 deaths recorded so far, according to a Central government data updated till Saturday. The total number of coronavirus cases in the country stands at 90,50,597, the data updated till 8 a.m. on Saturday showed.

Gupkar alliance rocky as partners field candidates against one another

After a month’s uncertainty over his fitness status, it has emerged Rohit Sharma may struggle to make it to Australia for the full Test series. Ishant Sharma too could miss out on the series. TOI had reported on Tuesday that the Indian team management is already looking to retain a player from the white-ball squad to cover for Rohit’s probable absence….

ISL | Chennaiyin picks up full points in a thriller against Jamshedpur

I’m A Celebrity: Do the contestants rehearse Bushtucker trials?

AMP Robotics, the recycling robotics technology developer backed by investors including Sequoia Capital and Sidewalk Infrastructure Partners, is close to closing on as much as $70 million in new financing, according to multiple sources with knowledge of the company’s plans. The new financing speaks to AMP Robotics’ continued success in pilot projects and with new […] …

Will participation in the Houston Open help or hinder the Masters contenders?