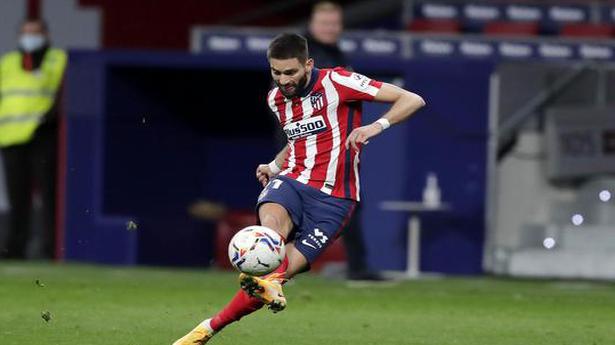 Atletico Madrid pulled off their first La Liga win over Barcelona in more than a decade as Yannick Carrasco capitalised on a blunder from Barca keeper Marc-Andre ter Stegen to secure a 1-0 victory at an empty Wanda Metropolitano on Saturday.

Belgian winger Carrasco broke the deadlock at the end of the first half, pulling off a classy backheel to knock the ball through the legs of Ter Stegen and keep his composure in front of goal after the German had charged out of his area.

Lionel Messi had won the fixture last season with a late solo goal but the Barca captain had a match to forget this time, creating very little danger and appearing hesitant in front of goal.

Barca’s former Atletico forward Antoine Griezmann missed the target in each half while defender Clement Lenglet had their best chance when, unmarked, he could only send his header straight into the arms of keeper Jan Oblak.

The win moved Atletico up to second in the standings, level on 20 points with leaders Real Sociedad, while Barca are down in 10th place with 11 points after a third defeat in eight league games under Ronald Koeman.

“It was our fault, it’s not good and we can’t let something like that happen again.”

The Catalans’ pain was compounded by the sight of defender Gerard Pique limping off the pitch with a suspected knee injury after a challenge from Angel Correa.

Barca’s players had come out for the game wearing T-shirts in tribute to their teenage striking sensation Ansu Fati who recently underwent knee surgery and they were also missing midfield anchor Sergio Busquets, a veteran of the fixture.

Atletico were without joint-top scorer Luis Suarez, who was deprived of a reunion with his former side after testing positive for COVID-19, while midfielders Hector Herrera and Lucas Torreira were also unavailable but they well deserved their victory.

Marcos Llorente nearly gave Atletico an early lead when his shot crashed off the bar, while it took a brilliant save from Ter Stegen to keep out a vicious distance strike from Saul Niguez.

While Barca had their chances to level, Atletico comfortably saw out the victory and coach Diego Simeone punched the air when the whistle came to signal his first league victory over Barca since he took charge of Atletico in 2011.

“It was our turn to win today but it won’t change our objectives,” said the coach.

“We knew exactly how we needed to play and that we would have to work as hard in attack as in defence.”

India vs Australia ODI | Found a nice rhythm but there wasn’t a lot of pressure: Steve Smith

Riyad Mahrez scored a hat-trick as Manchester City hammered Burnley 5-0 at the Etihad Stadium in the Premier League on Saturday — the fourth straight time Pep Guardiola’s side have beaten the Clarets at home by that scoreline….

You might think that a new Netflix film called “Holidate” offers holiday-themed romance that’s perfect for a family watch party. You’d be wrong. The film stars Emma Roberts and Luke Bracey as a pair of strangers who agree (in classic romantic comedy style) to keep each other company on holidays. And while the movie can’t […] …

Mira Kapoor says two-year-old son Zain is a fan of Spider-Man, decks up in clothes…

Established in 1994, Assam University offers several courses to the eligible students through its two campuses, Silchar and Diphu. Some